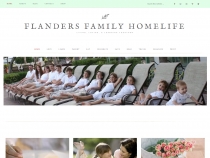 Our family recently toured New York City aboard THE RIDE, the most amazing tour bus I've ever ridden. 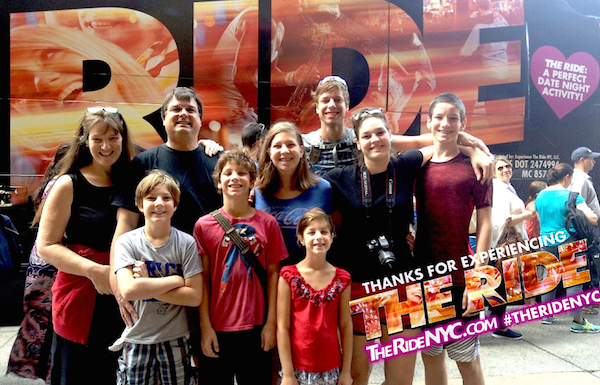 THE RIDE provides an experience like none other: Part tour. Part show. Total entertainment. 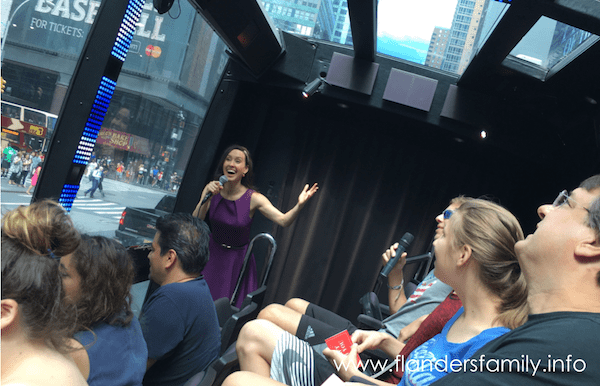 I can’t think of a more enjoyable way to spend 90 minutes stuck in traffic than listening to hosts Jackie and Scott exchange playful banter, sing Broadway show tunes, and share statistics, stories, and interesting trivia about New York City and the people who live there.

The tour bus was equipped with theater seating, floor to ceiling windows, flat screen TVs, and thousands of LED lights to make this a one-of-a-kind trip. 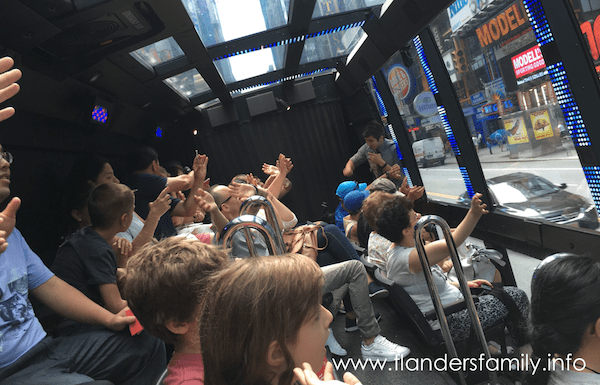 Seeing the city from that vantage point transformed the street into a stage, and every time we turned a corner, another entertaining scene would unfold before us.

Some of the most ordinary looking people would suddenly launch into a song and dance numbers before our eyes. Meanwhile, their fellow pedestrians remained totally nonplussed by their performances, as if they were used to business women skipping amongst the parking meters or deliverymen break dancing on the sidewalk. 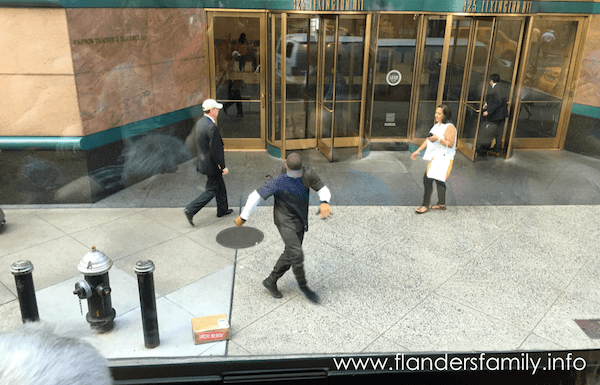 Furthermore, the most outlandishly dressed people on the street whom I fully expected were part of the show, evidently weren’t. They were just “normal New Yorkers” out for a morning walk. In costume.

Except for this ballerina. She was definitely a plant. I think. And so was the man with the backpack behind her, who enthusiastically joined in the dance when she “accidentally” bumped into him and twirled and lifted and leapt with her all around Columbus circle as our bus made the roundabout. 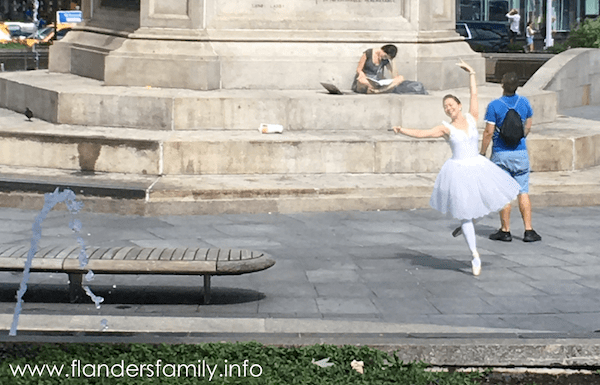 Meanwhile, there was even more action going on inside the bus, as Jackie and Scott broke out the karaoke mics and encouraged the audience to join in singing a few familiar NYC-themed tunes: “Start spreading the news…” 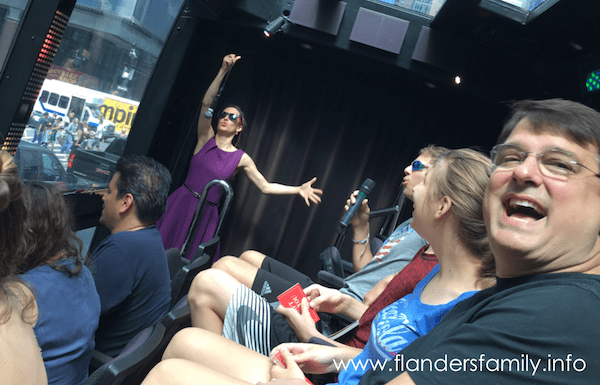 They also staged their own version of cash cab — complete with prizes — where they quizzed us with New York trivia questions and awarded ride points in seemingly random amounts for the answers they liked best. For instance, I got 50,000 “better-luck-next-time” points for confidently blurting out the “EMPIRE STATE BUILDING!!” to the question, “What is the 3-word name of the famous Manhattan building…”

I should have waited for the end of the question: “… our bus is currently parked in front of?” The answer, clearly spelled out on the building’s facade, was GRAND CENTRAL TERMINAL. (Incidentally, it’s called it a “terminal” — not a “station” — because all rides either originate or terminate at that location; none pass through.)

You’ll learn all sorts of useful information like that aboard THE RIDE. It’s easy to understand why it’s such a popular attraction.

THE RIDE was completely sold out the first two days we were in town, so we actually had to catch this tour on our return trip through NYC the following week. After experiencing THE RIDE, we were glad we made the extra effort to get tickets.